Get your ‘ang pows’ ready folks as the G-Shock 35th Anniversary Magma Ocean Collection has arrived and it includes three high-end G-Shock models: The Rangeman GPR-B1000TF-1, the Frogman GWF-1035F-1, and the MT-G MTG-B1000TF-1A. The color scheme of these watches is inspired by the magma ocean that existed during the formation of planet Earth. The theme represents returning to the origin and expresses the intention to continue producing something of value. The watches feature black bodies and bands representing G-Shock with red, rose gold, and yellow gold accents to celebrate the anniversary. Each watch has a “Since 1983” text on the display to commemorate the anniversary along with a 35th Anniversary case back and special anniversary packaging. Casio released The MAGMA OCEAN Collection model, the GPR-B1000TF／MTG-B1000TF／GWF-1035F which is a commemorative model to celebrate G-SHOCK’s 35th Anniversary. The colors of the watch evokes the magma ocean that covered the planet during its formation and the design looks back to the origins of the G-SHOCK brand. All three models feature a case back engraved with a logo that identify it as the 35th Anniversary models. 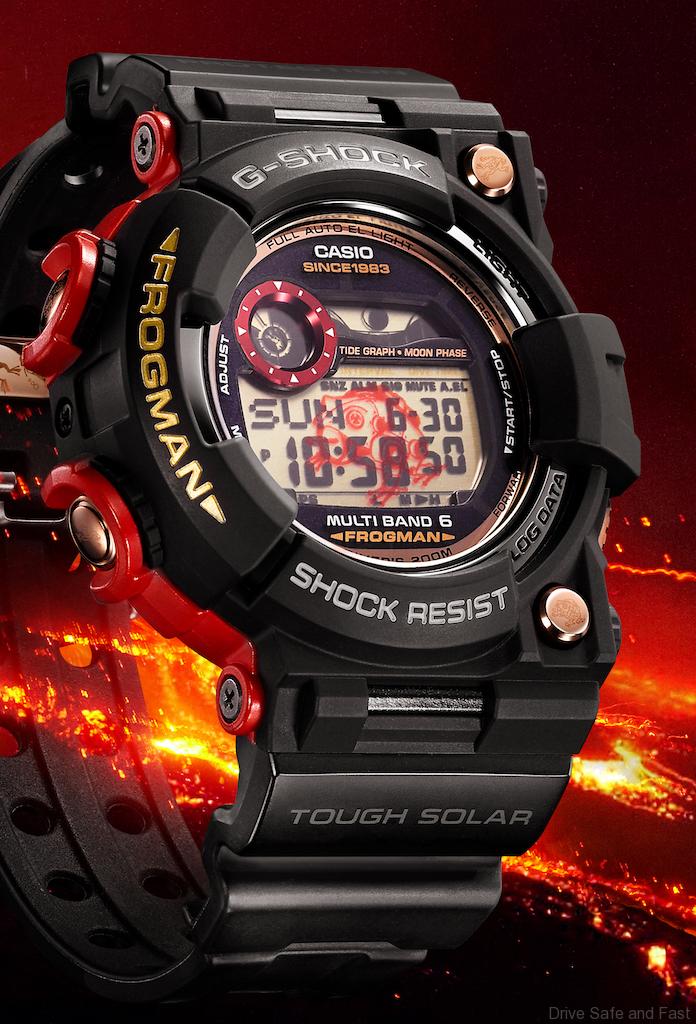 The G-Shock GPR-B1000TF-1 is based on the GPR-B1000 Rangeman featuring mud resistance, GPS tracking and time-syncing, solar-assisted charging, Triple Sensor, sapphire crystal, and carbon fiber insert band. This watch has a dual-layer resin band with a red inner layer.

The G-Shock GWF-1035F-1 is based on the GWF-1000 Frogman featuring ISO Diver’s 200M water resistance, Tough Solar, Multi-Band 6, and tide/moon graph. The Frogman line was introduced in 1993. To celebrate its 25th birthday, several Frogman graphics are placed around the watch to be discovered, such as on the front screws, LCD subdisplay, lower band, and band keeper.

The G-Shock MTG-B1000TF-1A is based on 2018’s MTG-B1000, part of the Metal-Twisted G-Shock (MT-G) line made of stainless steel and resin and featuring Tough Solar, Multi-Band 6, Triple G Resist, and Bluetooth Smart connectivity. The MTG-B1000TF-1A has a composite band made of stainless steel and a red resin inner layer. This model has a unique rose gold section between the lower lugs with three large stars and five small stars to signify the 35th Anniversary.

Ford and VW Deal A Month Away From Finalisation